I’ve tried many, many creative outlets and other hobbies. I’ve tried writing, drawing, painting, playing guitar, playing piano and some more. I’ve tried many hobbies among gaming, such as football (not handegg) and airsoft (which I actually really liked).

But every time, I’ve quit those things. I’ve maybe tried to pick them up later, but end up quitting. I just never got that something out of them. So I only had gaming as my hobby.

Before I explain how I got into actual gamedev, I’ve actually been making “games” for long time. In fact, I made my first “game” when I was around 5-6 years old. This “game” didn’t include programming or anything like that. And no, it wasn’t a board-game nor a card-game, although I made couple of those too.

It was, what I like to call, a PowerPoint-game.

Let’s go back to sometime during 1999-2002, I was about 6 – 11 years old. We used to visit my grandparents often, since they had a PC with internet access: 56kbps modem that let out the screech of the damned when it connected. We didn’t have a PC during that time. Our parents used it to pay bills, and my grandparents got the PC for work e-mail. And I got to use it too, mostly for DOS games, such as Mad Dog 2, NASCAR, Tomb Raider, Descent, Jazz Jackrabbit… Can’t forget the Windows classics either, like Chip’s Challenge, Rodent’s Revenge and SkiFree. Many goodies. Most of them were shareware though, but I had so much fun playing them.

But I always found the MS Office software interesting too, possibly because the words “document” (“Asiakirja” in Finnish, translates directly to “case-book” or something like that) etc. sounded cool to me. So I made often all kinds of stupid documents and PowerPoint -presentations, Excel sheets, even MS Access things.

I figured out eventually that in PowerPoint you could assign certain elements do certain things. You could insert buttons that change slides or even animate images. You can see where this is going.

My first “game” was basically a PowerPoint presentation, where the player could move an image of a car around by pressing buttons that were arranged as direction keys. I thought it was super cool and enjoyed playing with it a lot. Sometimes even more than playing games. But I didn’t really realise what I was doing, I only realised this many years after that hey, I actually did some sort of game.

“But that’s not a game!” Yeah, I agree with you, that’s why I quoted it. But it was close to one. It was interactive thing, where you could move an object by pressing direction buttons.

I just want to mention that I also made my first webpage during that age. I had a crappy old Win 95 PC that took literally 10 minutes to boot up. I installed some free games on it from random discs we got with computer magazines, but I spent a lot of time just making things with MS Frontpage. 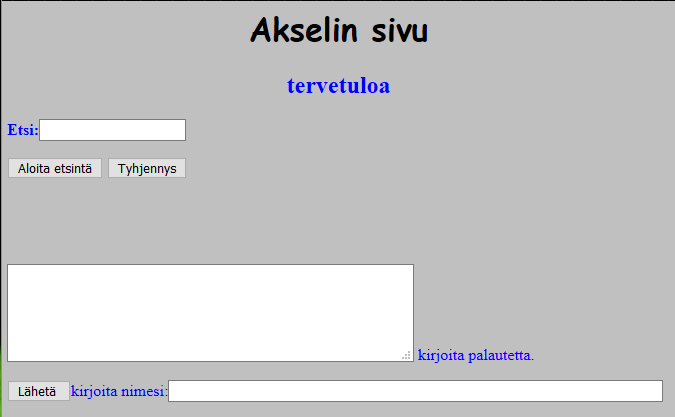 This is the only thing I’ve saved from that time. I had it on some old floppy disk and saved those files on my external hard drive, where they are to this day. Anyway, of course none of those forms work. But, the “Tyhjennys” (clear) button does! And the “Aloita etsintä” (search) button tries to search something.

I also had a more elaborate site, that had sidebar where user could login and such, and it had multiple pages. Most of them were nonsense about things I liked. Wish I still had that site, I remember talking about it at school and my classmates mostly laughed at me. I don’t think my parents really understood what was so cool about just a page full of text and forms either, heh.

Anyway, I found this kind of thing super fun. Especially the PowerPoint “games.”

Now let’s go to around year 2005 – 2007. I make my first Morrowind mod during those times, that was a mod for a gaming forum I used to frequent on. I asked the people there what kind of characters they have and recreated them all around a campsite, and gave them their own dialogue. Seeing characters talk in Finnish in Morrowind was kinda funny. I loved making that mod, too bad I don’t have it anymore.. I also made somekind of house mod later, adding a new house for my character.

2008, I made my first game. I used an engine called FPSCreator, that let anyone make first-person shooter games very easily. My first game was called “Ammu tai Kuole” (Shoot or Die), where you spawn in a room full of guns, then go through a door to an open field and you have to keep killing respawning enemies as long as you can. You can’t go back into the room where you spawned in. 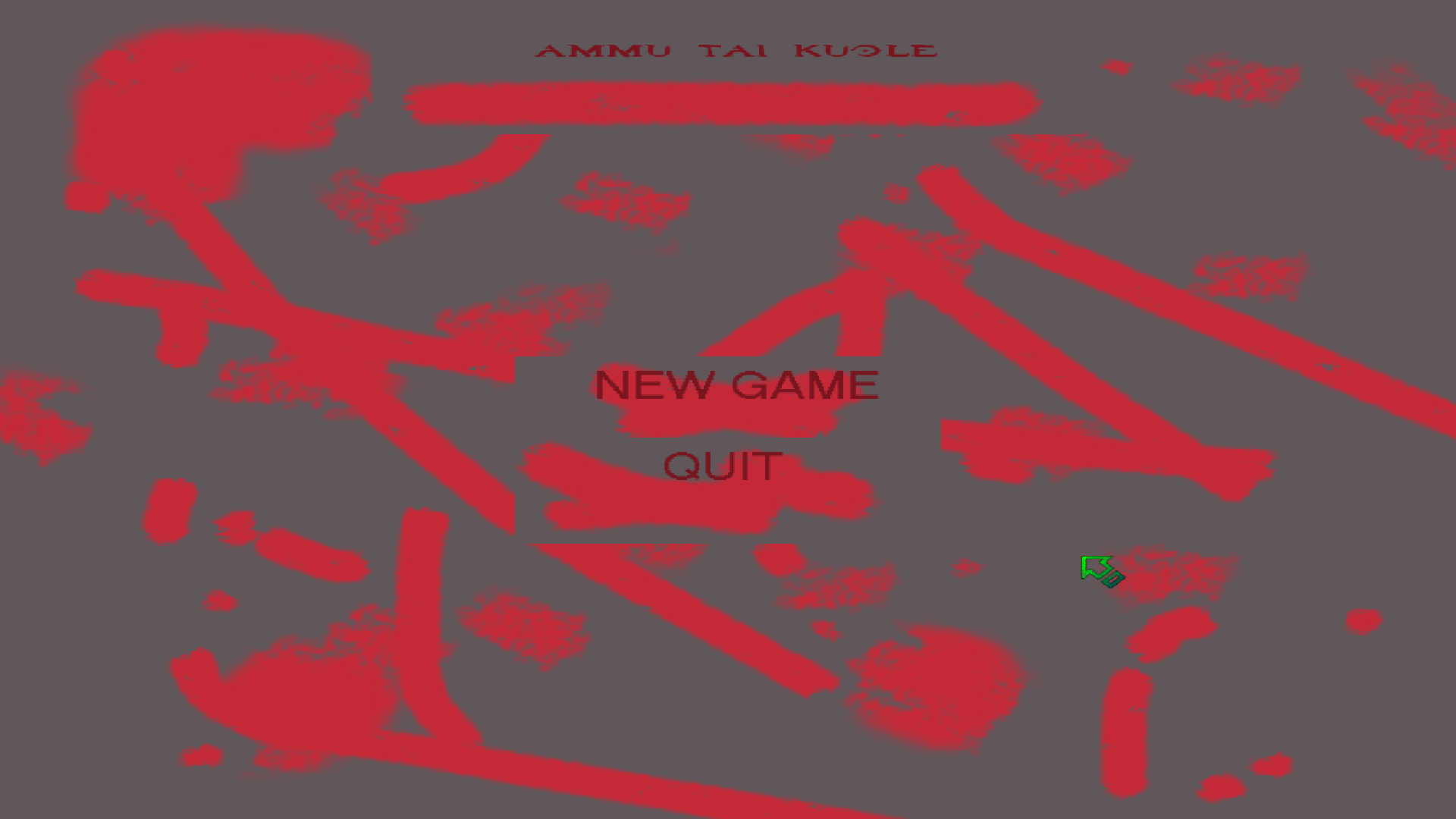 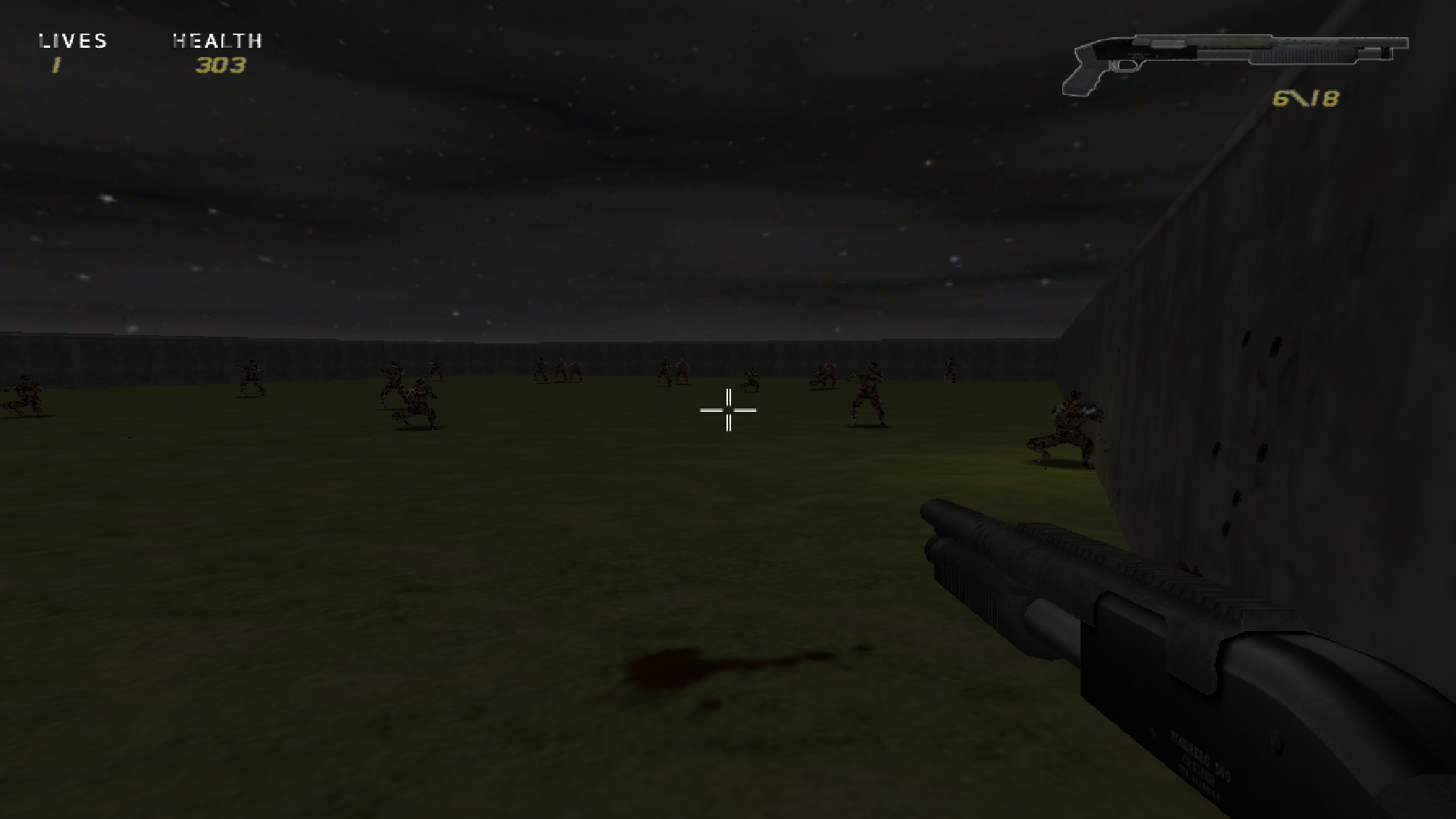 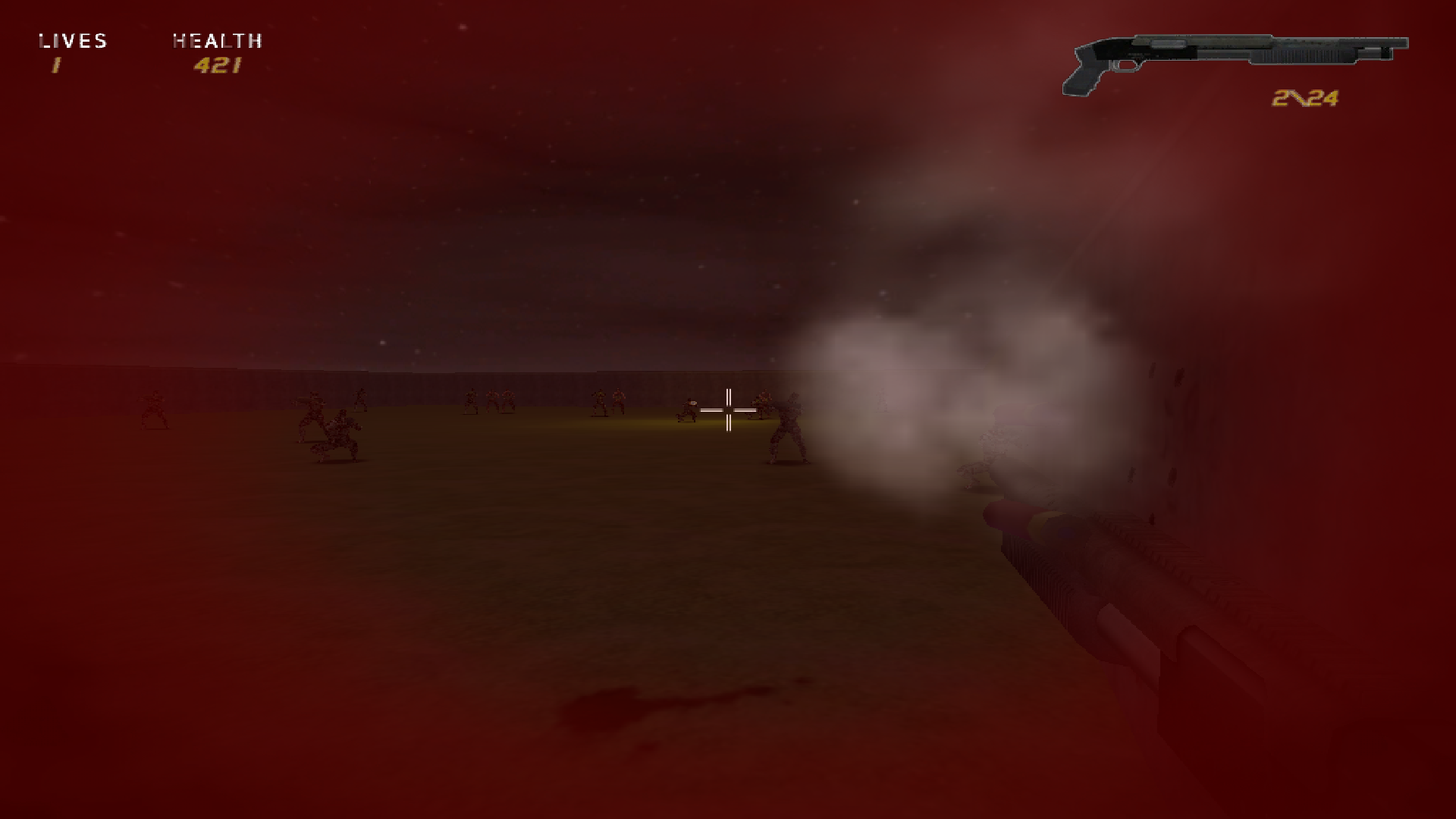 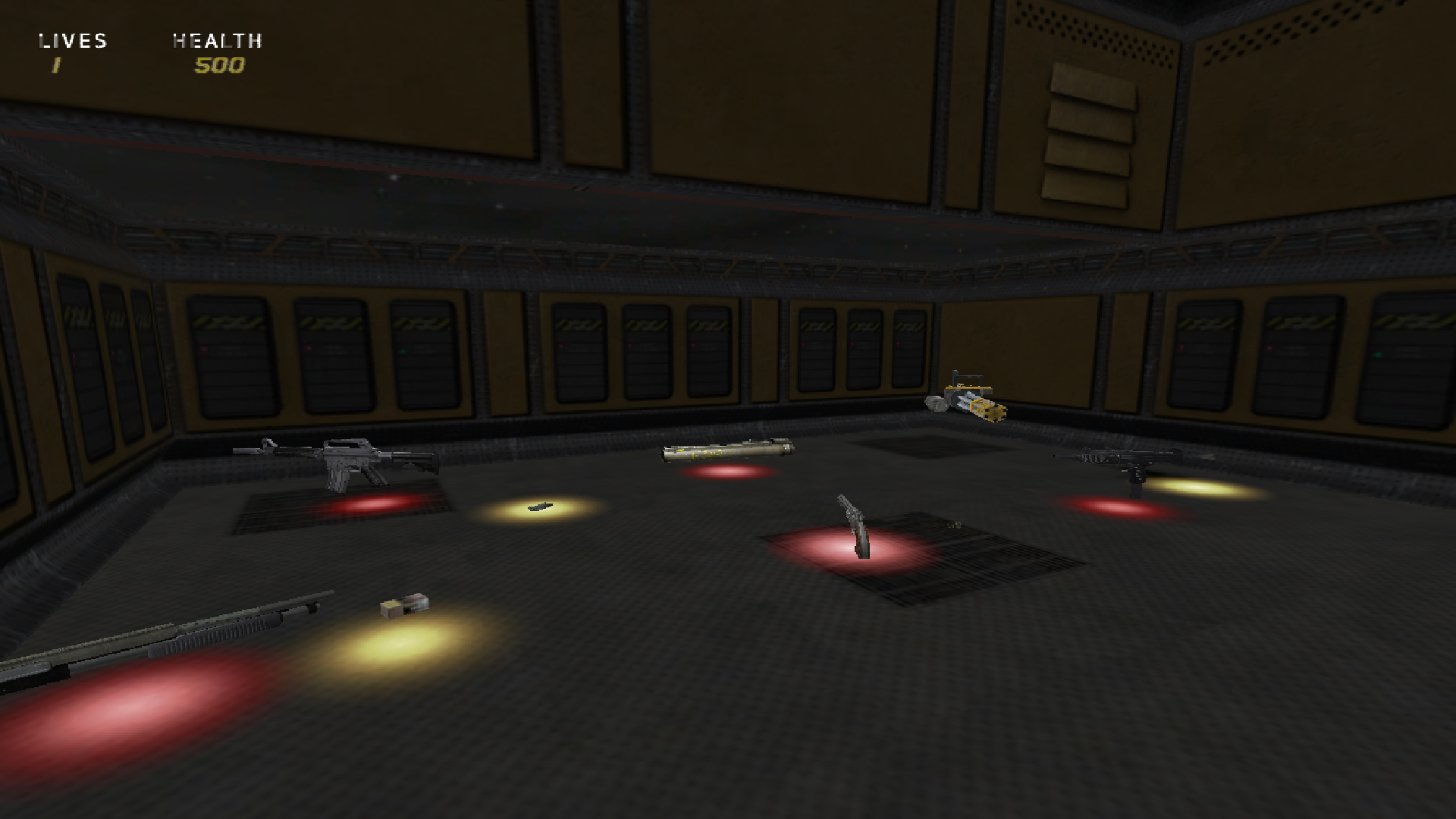 By the way, if you run this game on modern computer, it runs so fast you die in seconds. The FPS is directly tied to game speed. It’s great, rofl.

The game was based on some inside joke my friend told me, I can’t really remember that well, but I thought the game was hilarious. Especially the menu graphics made in 5 min with Paint. It wasn’t a super seriously done game, even back then. I knew it was shite. But I was still kinda happy that I had made a game.. So I tried to make a more serious one, about you waking up in a laboratory full of zombies, and you had just a pistol. It was pretty much inspired by Half-Life. You had to crawl in ventilation ducts and hallways, shoot things etc. But I never got it fully done, I think I just made the first level. But I remember it really well, and it was the thing that sparked my interest into game development.

I also made a text-adventure with C++, which was just basically bunch of if-statements and choices that end in a way or another. It wasn’t very long, but it was fun to do.

When it comes to webpages, I played around with JavaScript and made those dumb “What’s your name? Oh your name is X, your name is stupid.” things and clocks. It was entertaining at least.

Another thing I did was those dumbass VBS scripts that would never go away and put them on our school computers, because I was such a h4x0r.

Anyway, fast forward to 2013. I got into an art-school that had also gamedev stuff. But no programming. So I had to learn that myself. Anyway, during that time, I made my first Unity-games and other prototype/demo things. This was when I actually got really into gamedev, and it became my thing.

I finally had a thing. Not drawing, writing, music.. It was gamedev. It’s basically all of those, plus programming. I always enjoyed making things difficult to myself, I guess. Luckily I have Tecsie to help me with the artsy side, and friends to help me with other sides, so I can concentrate mostly on programming.

That’s how I got into gamedev.

The excitement of making a thing moveable. Then adding physics to it. Then making a world for it. Then adding other moving things to that world. Then making the things interact with each other. It’s like making whole worlds. But it’s really, REALLY difficult!

I’m not a pro at this by all means. I’m very amateurish still, even after +5 years of gamedev. It’s a constant learning process, and most of the things you have to learn yourself. The games I’ve made so far are quite bad when compared to others, but I am still proud of every single one of them I’ve done. And as long as they make someone, even one person smile, I’m happy. Sounds very cliche, but that’s how I honestly feel about it.

For example, Penance has been hugely popular (compared to my other titles). And I’ve been told that it’s great. People want more of it, which I just can’t even begin to understand, because I know what kind of buggy mess it actually is. 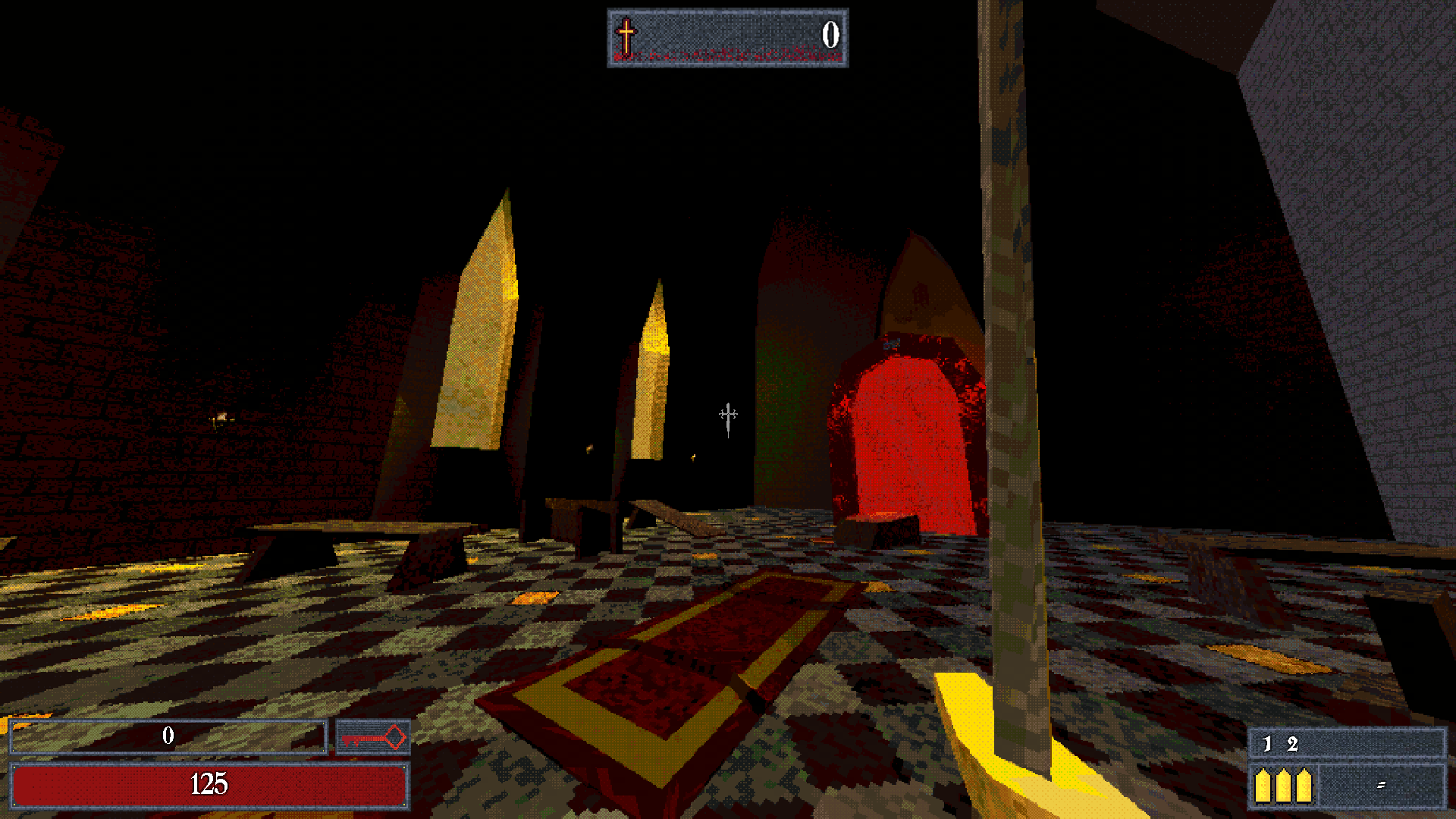 I was told someone wanted to know how I come up with concept for a game. It all just simply pops up in my head, when I’m trying to sleep or concentrate on something else. “Oh, this idea sounds fun.” I think, then start writing things down (and lose my sleep). What is the core of the game, what makes it fun, what does it need and so on. At that point, the concept possibly dies because “I don’t have skills/resources for it” or “It doesn’t sound that good after all.” But sometimes, the concept lives on forward and it joins my neverending list of game ideas, that I hopefully tackle on someday.

Currently I’m working on an RPG called Loputon with Unity and unnamed Scifi FPS made with C using Raylib.

In conclusion, gamedev is my thing. I love it and I hope to make games till the end. If you haven’t felt at home with drawing, writing, video making or other creative outlets, give gamedev a try!

Note: This post was originally for Tecsiederp’s (my fiancees) blog, however I wanted to preserve it here as well. It was originally written in 2018-10-13, and I have removed outdated information.